In an interview with STAT, Tim Pifer, the director of the New Hampshire State Police Forensic Laboratory described the role that fenanayl currently plays in drug usage.  https://www.statnews.com

What makes fentanyl so deadly?  A picture tells it all: 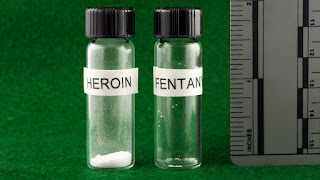 In identical bottles pictured to the left, you see a lethal dose of heroin, as compared to a lethal dose of fentanyl.
Notice how similar the two substances look. Notice what a tiny amount of fentanyl it takes to cause a death.
According to the Center for Disease Control and Prevention, Fentanyl can be as much as 100 times more potent than other pain killers.  Even  worse... Street drugs are generally made in home labs, so precise accurate measurements of fentanyl added to other drugs is questionable.  In fact, unlikely.
Consequently, a person taking a dose of heroin, for example, has no idea how much, if any, fentanyl has been added to the mix to increase potency.  What may seem to be a routine dose of heroin may, in fact, contain a lethal dose of fentanyl.
Remember the movie The Deer Hunter?  A group of soldiers sit in a tent in Vietnam passing around a gun with a single bullet. A terrifying scene.  It seems as if buying street drugs is similar, a macabre dance with death.

Popular posts from this blog

The Language of Addiction ... A Family Disease? Think again!

March 09, 2018
In his play Romeo and Juliet, Shakespeare poses the question:  "What's in a name?"  He muses on the question by saying,  "That which we call a rose, by any other name would smell as sweet."

Well, I get the point... sort of, but I'm not sure I agree.  I bet if we called a rose a "stink blossom", or a "wailing tooth ache bud", it may not smell quite as sweet.  Why?  Because words have connotations as well as meanings and those connotations are what shape our perceptions.

This is not a novel idea.  People change the name of things to change the perception of things.  We've seen it happen time and time again.  Janitors became custodians, garbage men became sanitation workers, stewardesses became flight attendants and store clerks became associates.  What was behind all these name changes?  An attempt to provide dignity to positions, to wipe away old associations and start anew.

April 14, 2018
Canada reported 4,00o fatal opiate overdoses last year and movement is underway to seek settlement from companies who not only under-reported the addictive effects of opiods, but also promoted their product to physicians through "perks" such as lavish vacations. According to Andrea Woo of  The Globe and Mail (Vancouver):
"Ten of Canada’s largest pharmaceutical companies have voluntarily disclosed that they spent at least $48.3-million collectively on payments to physicians and health-care organizations in 2016, but critics say the figures are incomplete and fall well short of genuine transparency."

$48.3 million?  Even if it is under-reported, it sure sounds like a whole lot of wining and dining and fancy hotel rooms to me.

Perdue Pharma LD has already paid out hundreds of millions of dollars in civil and criminal proceedings in the US in settlements related to their misleading information regarding OxyConton.  Although Perdue has not made a submission of guilt in Ca…
Post a Comment
Read more

Overdue or overdose: A librarian's dilemma

March 15, 2018
Those who thought the digital age would signal the death of libraries seriously underestimated the versatility of librarians.  Libraries have been diligent in re-purposing themselves from their traditional role to providing computer access and trainings to becoming a home for writing groups, speakers and clubs.  And now it seems that a librarian's role is being stretched a bit further.

Those of us who live in small-town America may be oblivious to challenges faced by inner-city libraries, but a recent article by Annie Correal in the New York Times highlights the issue:  drug users are finding libraries a convenient place to hang out, shoot up and sometimes--unfortunately-- overdose.  In many places around the country, librarians are being trained on the use of Narcan, the brand name of naloxone, which is used to reverse overdoses.  Responses are mixed:  some are reluctant to get trained, citing their lack of medical background and issues of liability while others take on the…
Post a Comment
Read more

Lynda Hacker Araoz
I first became in interested in opiate addiction when I discovered that my son was addicted to heroin. I spent years trying to find effective treatment for him and learned far more about the subject and its impact on families than I ever wanted to know. With my son now in recovery, I have turned my efforts toward trying to help others. Part of this was writing The Weight of a Feather: A Mother's Journey through the Opiate Addiction Crisis. I hope that other parents who have a child with an addiction will find camaraderie in its pages and that it will help put a face on addiction for others trying to advocate for better services and legislation. My background? I have a Master's Degree in Social Work, a Master's Degree in English and years working as an educator, a school district administrator, an adolescent therapist and a counselor. I currently teach writing at one of my local colleges. For a copy The Weight of a Feather, please contact me directly or pre-order through Amazon, Barnes and Noble or any of your favorite bookstores beginning in August 2018. Contact information: lyndahackeraraoz@gmail.com